Tiffany Waxler
"Lastly, there's Tiffany Waxler, some brat nobody likes. She acts like some sort of a 10-year-old spoiled brat. She's quite the master of using tomahawks, so I wouldn't underestimate her, but she's definitely a bitch, and everyone knows that."

Tiffany Waxler is one of the victors from District 10. She won The 61st Hunger Games at age 18. She also is reaped for being a female tribute in The 75th Hunger Games. However, she dies on the first day from wounds. It is also confirmed that she was a morphling addict in Catching Fire. This was because she used morphling to overcome the trauma she experienced in her Games. As a result of her winning, it changed her kind personality to a mean and nasty person.

During the reaping, after she is picked to be in the Games, her boyfriend (Chase) volunteers to be the male tribute in the Games so they can still be together, desipte him knowing that one of them will make it out alive if District 10 wins. During the parade, Tiffany and her boyfriend dress up as ranchers. During her interview, she acted very nice and sweet to Caesar and to the crowd. Tiffany's boyfriend is said to act silent and deadly.

Tiffany and Chase are one of the ones to enter the bloodbath. When Tiffany was fighting the girl from District 7, she is tripped by the other girl's foot and she lands on her face. Tiffany's about to get slaughtered when Chase takes the nearest weapon and decapitates the girl from 7 with a battle axe.

Chase pulls Tiffany up and they exchange kisses. Tiffany grabs the tomahawk from the dead girl. A boy is about to run up behind Chase and kill him, but Tiffany throws the tomahawk like its as light as a pencil, with the weapon getting in the boy's chest,puncturing his heart.

Chase thank his girlfriend for saving his life. Later, when they roam the arena with four backpacks and their weapons, and they avoid the salt flat part of the arena. While running in a random direction, they find more and bushes. And they're there for a reason too. On day 4, the lovers encounter the pair from 6, both small and lanky children. However, the girl from 6 has a slingshot. The slingshot isn't loaded with rocks, but with knives, and when the lovers attack, Chase gets a knife launched in his stomach. This angers Tiffany so much that she kills both of the kids in no time flat. Tiffany's boyfriend only recovers since Tiffany knows how to use the arena like a pharmacy, making many medicines that eventually get her boyfriend back on his feet. It takes them two days to do this. When they run out of food, they recieve a sponsor that has lots of food in it, and they ration it perfectly.

After eating what was left of the meal they received, they searched for food. They get attacked by Tracker Jackers. They don't hurt Tiffany, but they severely injure her boyfriend. At this point he can't take the pain and stabs himself in the chest, right where his other wound was, killing him. Tiffany didn't stop him in time from him committing suicide. This all explains why this made her such a mean person. At this point, she had nothing to lose, so she goes on a killing spree. When chasing down the last career on day 19, they both run into the mighty minotaur. The thing has only killed two people before them and is thirsting for more blood. When they were running away from the beast, Tiffany takes Chase's axe and slams it into the other girl's chest, causing her to fly back in the minotaurs hands and she is eaten, killing her, and crowning Tiffany the winner.

She was mentored by Greir Rollo. Her odds of winning that year were 8 - 1.

This year, she was mentioned by Jackson, as he saw her standing with the other victors from her district.

During these times, she was the mentor of the female tribute from her district. However, that tribute would die in the bloodbath on day 1.

During this time, she is seen in the tribute parade in the book in a cow outfit with a flaming belt. It looked like a poor ripoff of Cinna's idea of making the tributes shine, and so it looked like the cows were broiling themselves. However, in the film, she is seen wearing a greek-inspired outfit. During the countdown, Katniss spots Tiffany standing next to Marian and Chaff. In the bloodbath, she fights with Johanna Mason with an axe, in which she snatches from her. She then injures Wiress with it, but is killed by Enobaria by slicing her stomach open with a knife. She and his district partner did not protect Katniss and Peeta even though they were told to. Its unknown why they refused. It might be because they weren't told of the plan, even though that is unlikely.

When District 13 broke in the Capitol to save the remaining victors held hostage, her name was seen on a black pillar, along with her other victors from 10. 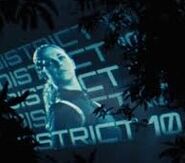