Dayo Okeniyi
"A boy tribute from District 11, Thresh, has the same dark skin as Rue, but resemblance stops there. He's one of the giants, probably six and a half feet tall and built like an ox, but i noticed he rejected invitations from the Career Tributes to join their crowd. Instead he's been very solitary, speaking to no one, showing little interest in training. Even so, he scored a ten and it's not hard to imagine he impressed the Gamemakers. He ignores Caesar's attempts at banter and answers with a yes or no or just remains silent."

-Thresh talking to Katniss in "The Hunger Games,"

Thresh was the male tribute from District 11 in The 74th Hunger Games. He is described as monstrously tall and could pick up any tribute like they were a toy.

Tresh was reaped into the 74th Hunger Games, along with the female tribute from his district, Rue.

During Thresh's interview, Caesar tries to help him to be more comfortable and talk. However, Thresh only answers in curt single word answers and remains surly. His behavior is quite similar to Soren Galloway's.

Thresh survived the initial Cornucopia bloodbath. When the Gong rings, he was one of the first people to get inside the Cornucopia. After retrieving a water container, backpack and a wavy sword, he is quickly confronted by the District 7 Male. The District 7 male tries to attack him, but he easily knocks the spear out of his hands and slashes his throat with his sword, killing him.

Later, he finds a field of wheat, which he uses to his advantage by using the wheat for food and also as a source of cover so he could hide. The Careers knew where he was, but decided not to attack him since they knew on how great a threat he was.

He comes out of hiding during the feast to claim his backpack, and overhears Clove's threats to Katniss and taunting her about Rue's death. Furious, Thresh attacks Clove, killing her by slamming her in the cornucopia until she died. As Thresh leaves, he takes not only his own backpack, but Cato's as well, forcing Cato to chase him instead of Katniss. When they fight, Cato manages to kill Thresh. However, in the film, he was eaten by mutts.

During this time, she encounters Thresh's family. Katniss and Peeta promise to their family that they will donate on month of their winnings every year.

During this time, Katniss says that Thresh was killed by Cato, which that contradicts itself since he died differently in the same movie trilogy. 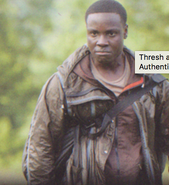