Maria Howell
"The woman, Seeder, looks almost like she could be from the Seam, with her olive skin and straight black hair streaked with silver. Only her golden brown eyes mark her as from another district. She must be around sixty, but she still looks strong, and there’s no sign she’s turned to liquor or morphling or any form of chemical escape over the years."

Seeder Howell is the 3d victor of District 11, and won The 30th Hunger Games at age 16. She was also reaped for The 75th Hunger Games. She is described as a strong woman, who hasn't fell to any drug abuse, unlike the morphings.

During her Games, she managed to win since she survived the longest without getting any food. There were many mutts and other monsters that hid in the maze that had thermal vision. Some other mutts were also equipped with night vision, so hiding from them wasn't really an option. Seeder avoided them since she was small and fast, making her hide in small confined spaces that the other tributes couldn't. Also, her odds of winning were 12-1.

She is introduced to Katniss and Peeta after the Tribute Parade, and Katniss can tell than she is getting out, but is strong and hasn't fell to any chemical escape over the years. Katniss wants her for an ally in The 75th Hunger Games, since she thinks that Seeder is someone that she can trust, bust she doesn't want to team up with her since she doesn't want to kill her. While being interviewed by Caesar Flickerman, Chaff steps on Seeder's foot and talks about how Snow could change the Quell if he wanted to, but he must not think that it matters much though.

During the time before the private sessions, Seeder was seen sitting next to Peeta and Katniss. It is unknown on what skill she showed, but Katniss later mentions that she could have gotten a medium score, or a low score. During her interview, she ruminates about how, back in District 11, everyone assumes President Snow is the all-powerful. So if he's all-powerful, why doesn't he change the Quell. After that, Chaff steps right on her heels, insists that Snow could change the Quell if he wanted to, but he most not think that it matters much to anyone. During the countdown, Katniss spots her standing next to Wiress's pedestal. During the Games, she is killed by Marian, from District 9, and places 22nd out of 24. Later, Katniss sees her death portrait portrayed in the sky. She died in her 60s.

During this time, when District 13 was breaking in the Capitol to retrieve the fellow victors, her name was seen on a pillar with her fellow victors from the same district. 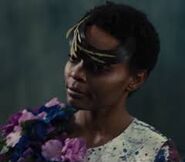