Blue
"I have to bite my lip not to scream every foul name I know at the fire starter. What were they thinking? A fire lit at nightfall would have been one thing...You might as well be waving a flag and shouting, 'Come and get me!'"

-Katniss Everdeen talking about her in The Hunger Games

Savannah Lintz is the female tribute from District 8 reaped to be participating in the 74th Hunger Games.

She was seen with waving to the crowd with her district partner, Sam Tan, while wearing teal and pink costumes with cross patterns and hats with present bows that represented textiles.

During the bloodbath, she ran near the cornucopia to get a black bag, only to run away in the forest. Later at night though, when making a fire, the smoke rises hight enough for the careers to spot her location. This also made the careers almost spot Katniss in a tree right above them. The careers injured Mackenzie, but Cato gave the job of killing her to Peeta, and thus she was murdered by Peeta with a knife. Her mutt was later used to try and kill the last tributes until one was standing, but its unknown if her mutt lived through the chaos of the finale or not.

On Katniss and Peeta's Victory Tour, her portrait was seen when the two victors arrived at her district. Her family consisted of and older lady and man, woh were probably her parents. 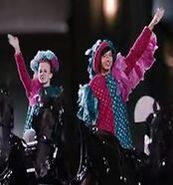