Josh Hutcherson
Peeta Mellark is the 3rd winner of District 12, winning The 74th Hunger Games, winning that year with Katniss Everdeen. and participated in the 3rd Quarter Quell. His nickname is "Lover Boy." He is also the husband of Katniss and the father of Rye and Willow Mellark.

Before the Games, we grew up and worked in a bakery, which was run by his incredibly harsh family. Peeta learned how to paint since he always decorated the cakes down in the bakery. This would help him camouflage while he was in the Games. One day, in 63 ADD, his father told him that he was going to marry Katniss's mom, but she left him for Mr. Everdeen for his voice. He went to school that day and saw Katniss for the first time and immediately had a crush on her. Later during school, he won 2nd place in a wrestling competition, but his older brother took first place.

Peeta had a crush of Katniss, that started when they were five. Peeta tells Katniss how he fell in love with her in the cave that they took shelter in during the 74th Hunger Games.

While reaped, his brother, Jackie Mellark, refused to volunteer for him. His father brings cookies for Katniss before she was on the train to the Capitol (in the book). This made Peeta a participant in the 74th Hunger Games. He and Katniss is mentored by the past victor, Haymitch Abernathy. Katniss later goes on the train and talks to drunk Haymitch on how to survive the Games. However, Peeta steps up for her, since Haymitch was being a smart-ass, resulting in him getting punched in the face. During the tribute parade, he was dressed in a black outfit that was lit on fire. This made him very famous, thanks to his stylist, Cinna. Like earlier, in training, he showed off his painting in the training center. He got an 8 for his training score, which the prep team really liked. During his interview, he was seen as very humorous and confessed that he liked Katniss. This angered her, so she pushed him, knocking over a vase, cutting his hands.

He later says that he doesn't want to be a part of the Capitol's Game's, and wants to still be him. On the first day of the Games, Peeta runs away from the Cornucopia. He later allies with the careers, even though Glimmer doesn't like that he's in the group and wants to kill him. However, Cato thinks he's good with a knife and wants him to stay("Besides, he's our best chance of finding her." Cato talking to Glimmer) . On the first night, Peeta kills the District 8 female. The careers corner Katniss, but Peeta gives them a plan to attack her when she comes out of the tree. This gives Katniss time to cut the branch where the Tracker-Jackers are, killing Glimmer and the District 4 Girl. However, Cato, Marvel, and Peeta got stung too, multiple times, but don't die. Cato punishes him for doing that and slices his leg open and leaving him to die. However, this time, Katniss patches him up in a cave, since she ran into him while he was camouflaging.

Later, on the last day, the mutts try to eat the last remaining participants, which are Katniss, Cato, and Peeta. They all climb on the cornucopia and fight there. Cato almost kills Katniss, but Peeta tries to stop him. When Cato is about to slit Peeta's throat, she shoots her arrow in Cato's hand, so that Peeta can push him off, into the pit of mutts. After some time, Katniss ends Cato's life by shooting an arrow to his head. Next, Claudius orders the two tributes to kill each other, leaving them a lone victor, but instead, Katniss pulls out Nightlock berries and gives Peeta some, so that they will both die if they can't have each other. After three seconds, Claudius says that they've won, since the Games can't have no victor. This was seen rebellious in the Capitol, and so they hated the two for this. While on their way to the Capitol, Peeta almost bleeds to death from his leg wound since he can't move. However, he gets a robotic leg. Katniss notices this when he is interviewed by Caesar Flickerman for the second time. Snow gives him a crown to wear for his victory.

While on the tour, Peeta and Katniss will always donate a month's worth of their winnings to Rue and Thresh's families, for the rest of their lives. This gives Thresh's grandma a smile. However, a man from the crowd salutes them, which gets him killed by the Peacekeepers. For the other Districts, it looks like he's reciting from a drilling manual, instead of sounding in love with Katniss, which angers Snow, since this makes the districts rebel. They do this since if 2 people can defy the Capitol with berries, then what can stop them?

When Haymitch gets reaped, Peeta volunteers for him. This makes him a tribute again in the Games. While being mentored by Haymitch again, they have their old stylists. This includes Cinna, who makes another wonderful outfit for this year's tribute parade. His outfit makes him look like he's dressed in lava, and his outfit can also light on fire again. This year, Peeta makes many friends with the other victors, which makes it worse when he has to see them die. In the training center, he hangs out with Chaff, Brutus, Megan Hayes, Justin Hix, etc. While being interviewed, he tells the crowd that Katniss and he are married, and will be expecting a baby, so that they can get out of the Games. They participate anyway. While in the Games, he allies with Finnick, Mags, and Katniss after he drowns Jackson, the guy who stood next to him in the countdown that year. While in the jungle, he runs into a forcefield, which was about to kill him, until Finnick did CPR to save his life. In the nighttime, the crew has to run away from the poisonous fog. This badly injures Peeta, Finnick, and Katniss are about to die until Mags sacrifices herself so the fog can stop. He later teams up with Johanna, Beetee, Wiress, (including Katniss and Finnick). They are later attacked by the monkey mutts, but still survives since Megan Hayes sacrifices her life to save Peeta. She says farewell to her as she dies. This marks the end of the 1st day.

They go to the cornucopia, but to be attacked by the careers, in which the battle ends with Cashmere, Gloss, and Wiress dead. Peeta is not injured because of this. He even manages to stay on the rotating Cornucopia. After that, on the 3rd day, Peeta has to leave Katniss behind so he can guard Beetee doing his plan. He does not like to do this but does it anyway. He is attacked by Enobaria and Brutus, in which he kills Brutus for murdering Chaff. Enobaria survives but doesn't seem to fight him. When the Games come to an abrupt end, he is captured by the Capitol, along with Johanna.

During his time in the Capitol, he is forced to try to call a cease-fire while talking to Caesar on TV. Because of this, the rebels call him a traitor. He is later tortured, alongside with Johanna, and the Capitol attempts to brainwash him by filling him with Tracker-Jacker venom and giving him false memories. It is later known that his family died in the bombing of District 12. He is later rescued by District 13. When Katniss tries to talk to him, he tries to kill her but fails. While participating in the "The 75th Hunger Games", he nearly died in there, while killing Mitchell and Holmes on the way. While trying to escape the place, Katniss and Peeta fall in love again, making him listen to Katniss when she tries to help him. They later have 3 kids ,Arya ,Finnick and Willow.

While being held hostage in the Capitol, he was seen several times in Capitol TV in the background with President Snow and Johanna. 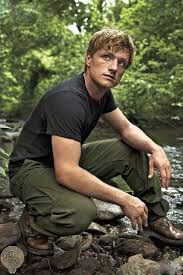 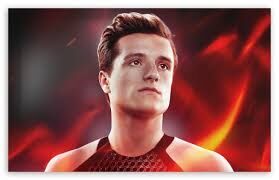 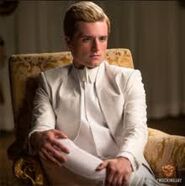