Megan Hayes
"She sacrificed herself for me and I didn't even know her name."

She is also known as, "The Female Morphling". Her appearance was depicted by Katniss Everdeen in Catching Fire, saying that she had yellow skin from the overdoes of morphing, and huge eyes.

Before she won the Games, her odds of winning were 16 - 1. Also, her mentor that year was Ivo Lockhearst.

She won these Games by hiding until everyone died. She wasn't good at fighting but was very skilled at camouflage since she knew how to paint. However, something must have really disturbed her about the Games since she wanted to use drugs heavily to forget about the Games.

During these Games, she mentored Titus, the cannibalistic tribute that became very popular for this. However, Titus was whipped out in an avalanched speculated to be from the Gamemakers to ensure that the victor wouldn't be an insane cannibalistic kid. It's also said that she was seen in the tribute parade that year.

During this time, she mentored both tributes this year. However, both died on day 1 anyways.

When reaped for the new Quarter Quell, she was very displeased on bering the female tribute again. Haymitch Abernathy mentions how she isn't a threat, explaining on how she won her Games. During training, she is seen with her district partner painting on Peeta, Katniss, and on Justin. During her private session, its unknown on what score she received, but Katniss sees on how big of a mess they made during the private sessions. Before the Games begun, she stood next to Woof and possibly Cecelia. During the Games, she did not participate in the bloodbath and simply ran terrified. She managed to survive while her partner died. In the movie, when Katniss runs down one of the rock paths, she looks to her left and you can see Megan running into the jungle. On day 2, when Peeta is being attacked by the monkey mutts, Megan jumps out of the bushes to save his life, since she was in the plan to save Katniss and Peeta.

She was mentored by Tressa this year.

When District 13 broke in the Capitol to save the remaining victors held hostage, her name was seen on a black pillar, along with her other victors from 6. 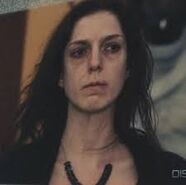 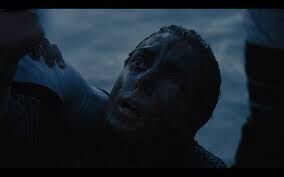 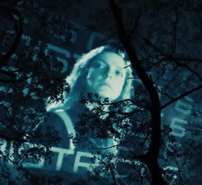