"I killed a boy whose name I don't even know. Somewhere his family is weeping for him. His friends call for my blood. Maybe he had a girlfriend who really believed he could come back... "
-Katniss talking about Marvel in "The Hunger Games"
Marvel is a minor antagonist in The Hunger Games He was a male tribute from District 1 and was also a member of the career alliance.

Before the Games, Marvel, along with the other careers, specialized in training when he was young beefier the Games. He specifically trained with a spear. During the deleted scenes of his interview, we know that his father was a hunter. Its also known that he was mentored by Gloss, along with his district partner, and that he was a volunteer for someone else.

During the opening ceremonies, he and his district partner, Glimmer, were spray painted silver and were wearing tunics. In the movie, Glimmer and Marvel wore fuchsia outfits, representing their district's main export, luxury.

Marvel's weapon (most of the time) was a spear. He is shown throwing a spear in the Training Center. He showed great skill at fighting and throwing spears which made him very deadly. While the District 3 female was on the gauntlets, she was tripped and he and the other Careers laughed. He received a good training score of 9. Marvel showed the same arrogance as many of his fellow careers, but lacked the ruthless of Cato and Clove (probably because they were from District 2); however, unlike his fellow tribute Glimmer he was very well-trained in his weapon of choice which was a spear.

During his interview with Caesar Flickerman, he wore a blue suit with matching blue trousers and was presumably trying to be funny. A mentioned, he said that his father was a hunter. His past is also reveled. He said that he always wanted to be a victor, since it looked fun.

When the gong rang, he ran to the Cornucopia to battle for supplies like most of the other tributes, picking up a knife on the way there. He spotted the District 8 Male, and repeatedly stabbed him to death with a khukri. Around a minute later he spots the District 9 Female and kills her too by spearing her in the back. He was also seen watching Glimmer kill the District 6 female. Marvel goes up against the District 10 male and battles with him. The District 3 male grasps on his axe, but Marvel pushes his backpack into his face. He notices the District 7 female on the ground, so he chases her and strikes her in the heart along with the District 9 Female with a spear but only the girl from 7 survives.

As expected, Marvel made an alliance with Glimmer, Cato, Clove, Peeta, the District 3 male, and the District 4 female (book), to form a typical career alliance which includes two non-Careers. Marvel helped the Careers chase Katniss up a tree. It appears in the film he noticed her before any of his fellow careers do by yelling 'There she is!' Realizing that it will be difficult to attack her, he and the other Careers form a camp below her. While in her tree, Katniss spots Rue, the female tribute from District 11, in a nearby tree hiding. Rue points out a tracker jacker nest hanging near her. Katniss takes the knife out of her backpack and cuts the branch that held the tracker jacker nest off. The nest hit the ground and burst open and he, Cato and Clove were stung many times, forcing them run to flee to the nearby lake. Sadly, his district partner and the District 4 Female were killing in the attack.

After Marvel and the other Careers recovered from their tracker jacker stings, they began to hunt for more tributes. The Careers were then distracted by the fire and took off to kill the tribute who started it. Marvel and the others set out to find Rue, but later, he was the only one to find her. Marvel traps Rue on her way to light the last fire she and Katniss planned to light. As Rue screams for help, Marvel throws a spear into her chest/stomach. Katniss witnesses this and shoots him through the chest. Marvel tries to remove the arrow by pulling it out, but since the arrow had punctured his heart it caused the blood flow and breathing to stop, resulting in his death. In the film, Katniss reaches Rue first and cuts the net. Marvel throws a spear and Katniss luckily dodges it, but it hits Rue, resulting in her death. Katniss skewers him in the heart with an arrow, causing him to die almost instantly. Rue removed her spear but already lost a significant amount of blood. Marvel placed 8th out of 24.

When the wolf muttations of the fallen tributes appeared chasing Cato, Marvel's was one of the pack, since he died before the finale. His is seen with with brown fur and being particularly taller and skinnier than the other mutts. It is unknown if the muttation of Marvel survived the battle between the pack and Cato, Peeta, and Katniss.

He appeared in Catching Fire film when Katniss shot a turkey. However, she had a hallucination and thought that she shot Marvel. 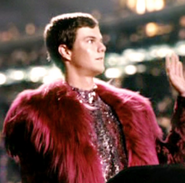 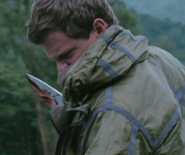