Blue
Marina Macken was the female tribute from District 4 who participated in the 74th Hunger Games. She was also a career in the book but wasn't in the movie she was in. When asked on Twitter about her character's name, her portrayer confirmed that it was Marina.

He and her district partner wore light blue outfits with blue crowns that looked like splashing water, pearls and bubbles, and the shoulders on their outfits that were pinned together with starfish, obviously representing the ocean, which was very appropriate for her district, with their main industry being fishing.

In the film, She is first seen with the other tributes listening to Atala explaining the rules. Later when Marvel is using a spear to fight with the trainer, she is seen behind learning how to throw a knife with her trainer. Later, slightly behind him Cato Hadley, she's there trying to get in the gauntlets behind her. She was also seen using a bow and arrow behind Peeta Mellark when the careers teased him. In one of the trailers of the first film, she's seen throwing a knife in the training center on Marvel Sanford's right side.

Being a Career, she injured several tributes. In the film, she was killed a short time after the Bloodbath, contradicting her book appearance. When the gong rings she runs towards the Cornucopia, just like many of the other tribes that day. She runs towards the left, as Cato cleaves the District 10 Male. The District 6 female tries to attack her with a serrated sword but she brutally beats her, pushes her to the floor and grabs the sword. She slashes the District 3 Female's leg with the sword when they run into each other. She grabs a wavy sword and She then confronts Cato and swings her sword at his head, but he ducks. Cato knocks the sword out of her hand, and then hits her stomach with a machete, throwing her into some crates though she luckily survives. She is then seen by Katniss grabbing a back and running. She is later killed by Cato in the forest.

In the book, after surviving the bloodbath, she and the other Careers hunted down and killed the District 8 Female. After the forest fire the Gamemakers had created, she and the Careers found Katniss Everdeen in a lake, tending to her burns that she sustained. The careers chased Katniss up a tree, but since Katniss was too high up and none of the Careers were able to reach her, so Peeta suggested that they wait until morning for Katniss to come down. They agreed and camped under the tree. Katniss saw Rue Stenberg pointing to a tracker jacker nest above Katniss' head. at the branch and sends the nest down onto the Career's, causing them to flee. Both Glimmer and the District 4 female received numerous stings. Unlike Glimmer who was swatting at the tracker jackers frantically, the District 4 female dropped her stuff and ran out of sight to try and make it to the lake, leaving Glimmer to be stung to death before she could escape. Several minutes after Glimmer died, she had collapsed from the many stings she had received and died.

During Peeta and Katniss's Victory Tour, her face is seen when the two victors visit her district. We see that she has three female family members on the stand, probably meaning that she had a mother and two sisters, but this can't be confirmed. 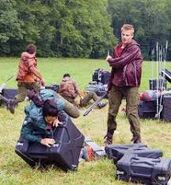