Marian Greene
Marian Greene (sometimes her last name is called "Green") is the 2nd to last winner of District 9, by winning The 37th Hunger Games. It is confirmed that she was one of the morphling addicts in Catching Fire.

During the Games, she was very quick, and she used this to her advantage. In the cornucopia bloodbath, she ran for supplies, and ran into a cornfield. She hid in it and slaughtered 5 tributes, crowning her the winner.

During this time, she was one of the mentors that mentored the new tributes from 9, specifically the District 9 Female. However, she would fail to teach her how to really win the Games (as its assumed) since both of the tributes that day died in the Cornucopia Bloodbath on day 1.

During the Games, she was reaped from her district. She was seen in the book dressed up as a loaf of bread. During training, she spent time with axes, swords,and knives, much like Ivette Li-Sanchez. During the countdown, she is spotted by Katniss standing next to Tiffany and Finnick. During the bloodbath, she fought with Ivette until she attacked Brutus and Seeder. During this time, She was able to kill Seeder, infuriating Chaff. However, Brutus kills Marian in close-combat anyways. She and Daniel were not told to protect Katniss and Peeta during this time.

During this time, when District 13 was breaking in the Capitol to retrieve the fellow victors, her name was seen on a pillar with her fellow victors from the same district. 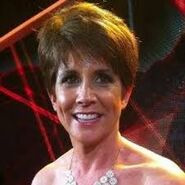 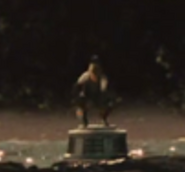