Brown
Kristof Ly is the male tribute from District 7 in the 74th Hunger Games.

Sam is seen wearing a white outfit in the tribute parade while waving to the crowd with his district partner, Maple Hancock, wearing the same thing. However, in the book, they're supposed to be dressed like a tree.

Sam is seen in several instances of training. He is also seen along with Katniss Everdeen, Peeta Mellark, Max Jamieson and Sam Tan listening to Atala explaining the rules.

On the first day, Kristof runs toward the Cornucopia in hopes to get a backpack and a weapon. He tries to kill Jeremy Marinas with a spear but is pushed down.

by him. He then runs into Chris Mark, tries to kill him with a spear or a lance (since he wants to defend Maple), but is eventually killed by Thresh Morrowson with a sword. His face is projected in the sky for a brief moment in the film. In the book and film, his DNA is in the mutt that tries to kill Katniss, Peeta, and Cato Hadley. It is unknown if it died or not. 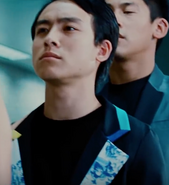 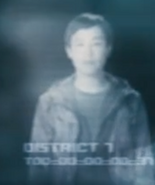