Jena Malone
"I don't care if you are knocked up. I'll rip your throat out."

- Johanna talking to Katniss in The 75th Hunger Games

Johanna Mason is the 2nd to last victor of District 7, at the age of 17.

Since she mentioned on how the tributes of District 7 wore costumes resembling trees for 40 years since Catching Fire, it can be safely assumed that she wore this outfit too.

During the Games, Johanna very convincingly acted weak and helpless, so that she would be ignored, but when there were only a handful of tributes left, she proved to be a vicious killer. She acted so weak in fact that she received a score of 3 for her training session. Since her score was so bad, her odds of winning were 25 - 1. After winning her Games, she was sold into prostitution by the Capitol.

During these Games, she mentored victor Pliny Arausio. However, its unknown if she gave him any good advice, as she is very unpredictable.

Since she was the only living female victor from her district, she was reaped for the female in this year's Games.

Johanna first meets Katniss and Peeta after the opening ceremonies of the 75th Hunger Games. Dressed as a tree, she complains that the tributes from District 7 have been wearing tree costumes for 40 years thanks to their stylist, and wishes that she had gotten Cinna as her stylist. She unnerves Katniss in the elevator when she strips off her costume, wearing nothing but forest green slippers. Katniss is immediately turned off by this action, eyeing Peeta's reaction. He later explains to Katniss that Johanna did this to get a reaction since she and the other tributes obviously see Katniss as being the most "pure."

During the bloodbath, she fought with Tiffany for an axe, but Tiffany took it from her. Once she was killed, Johanna took the axe.

During the Games, on the first and 2nd day, she teamed up with Blight, Wiress, and Beetee. She called Wiress "nuts", and called Beete "volts". However, Blight and Wiress would be killed on the second Day. She then later teamed up with Katniss, Peeta, and Finnick. The team also consisted of Beetee as well. On the 2nd day, she killed Cashmere Nicholo, and tribute from District 1, by thowing an axe at her chest, killing her. While the cornucopia spun, she tried to hold on to Katniss, but Katniss's hand slipped out of her grip, throwing her into the water. She was informed about the plan to save Katniss, and was the reason why she teamed up with Wiress and Beetee in the first place. While working on Beetee's plan with the wire, she injures Katniss to make it look like she died, since they were being chased by Brutus and Enobaria. Brutus and Enobaria believed it, and Johanna led them off-course. When the Games were over, she was captured by the Capitol.

During Mockingjay, she is tortured alongside with Peeta Mellark, most likely with water and possibly electrocution. District 13 rescues her however, but still remains very mean and vicious to Katniss, even though she was the reason why 13 rescued her in the first place. When the remaining victors had to vote on if there should be a Hunger Games for the Capitol children, she voted yes, along with Haymitch, Katniss, and Enobaria. She was going to be in The 76th Hunger Games, but she had to recover from being injured by the Capitol. When District 13 broke in the Capitol to save the remaining victors held hostage, her name was seen on a black pillar, along with her other victors from 7.

During her time in the Capitol being held hostage, she was seen in the background with Peeta as well. 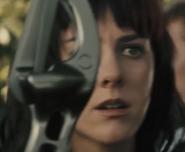