Brown
Jason Moio was the male tribute from District 6 who participated in the 74th Hunger Games. He was mentored by Megan Hayes. His character's name was confirmed to be Jason Henson.

In the Tribute Parade, he was dressed in a gold, flowing costume that resembled a moon. He also wore a crescent moon-shaped headpiece with small stars on it that curved around his face. This was worn by both him and his district partner. It may have been based on space shuttles and space travel, because of the moon theme, but it isn't known why their stylists chose this costume idea.

At the start of training, Jason can be seen practicing hand to close combat and wrestling with Jeremy Marinas. Later, he got into a fight with Cato Hadley, because Cato thought he took his knife and threatens to target him in the arena. However, it was actually Rue Stenberg who stole the knife and was hiding in the net on the ceiling.

When the gong rings, he runs straight towards the left as Marvel Sanford stabs Sam Tan to death. After arriving at the Cornucopia, Cato targets him, beats him up and leaves him for dead, but he gets up. He fights Jeremy Marinas over a backpack but is elbowed to the ground. While Glimmer Belcourt kills his district partner near a crate, he looks for supplies in a backpack. He then attacks Chris Mark, pins him on to a crate and strangles him. He grabs a sword and attempts to kill Glimmer, but Chris gains the upper hand and slams his head on a crate repeatedly, stabbing him in the back of the neck, but not killing him. Then, after Glimmer shouts for help, Cato kills Jason with a hand scythe. After his death, the male tribute from District 6 had a wolf mutt made from his DNA to look like him. It is unknown if his mutt survived the battle at the Cornucopia. 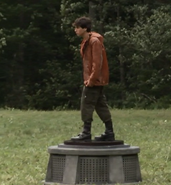