Younger Brother (mentioned in meeting the other Victors)

Spear
Ivo Lockhearst was the second victor form District 6. He won his Games at the age of 18.

He was reaped to be a tribute in the 15th Hunger Games. While in the arena, during the Cornucopia bloodbath, Ivo took a spear and killed 2 tributes. He then ran off with lots of supplies. Days went by and not a single tribute got killed after that, until the Gamemakers created a storm so incredible that it killed everyone except for Ivo, who hid in a cave, and both tributes from District 1, who fought each other to the death and ended up killing each other, leaving Ivo victorious. Ivo was the strongest tribute in the games since he worked a lot on vehicles and won his games at age 18.

His odds of winning were 10 - 1. Also, his mentor was Tressa Spectral. He was also the strongest tribute in the Games that year.

During the time, he is the only mentor from his district in the Games, "From 6, there's Ivo Lockhearst. I've heard of this man before. Even though he wasn't a career, he's so athletic looking that he could easily clobber me into the ground. I try my best not to offend this guy since he has a short temper."

During the 40th Games, he was the only mentor from his district at the time. He also talks to Thorburn, the victor that year, "From 6, there's Ivo Lockhearst. He's a pretty strong looking guy. I wasn't alive for his Games, but I've been said that he was the strongest tribute in the Games before the reaping this year. I ask for him to talk about his Games since I wasn't alive for that. Besides, I didn't really pay attention to his Games during that whole, "highlight" of their Games.

The info I got from him was that he killed with a spear, and he said that there was a storm so great that it killed everyone except him, and the tributes from 1, since he hid in a cave. Everyone else drowned, while he blocked the entry of the cave with multiple boulders. Yeah, he was the strongest in his respective Games. Anyways, he acts pretty cool about it, not even bragging, even though he has the right to since he won."

Years later, he was Justin's mentor in her Games, giving him the idea of Camouflage.

He was also the mentor of Megan as well during her respective Games.

Ivo was seen standing with his fellow victors during the reaping this year. He mentored both Megan and Justin during this time. However, he failed keep them alive.

In one of the film places they used to shoot the first film, there were many pillars showing the names of each victor that won a Hunger Games. As expected, his name showed up on one of the pillars there, along with the other victors from his district.

He met his end in the Victors Purge when the Peacekeepers burned down his house with him in it. This also killed his family. He died alongside with his fellow victor and mentor, Tressa Spectral.

Him during the reaping of The 75th Hunger Games

His messed up Victory Tour poster 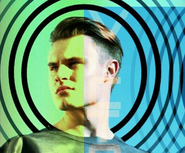