Levin Rambin
"The girl tribute from District 1, looking provocative in a see through gold gown... You could tell that her mentor didnt have to come up with an angle for her. With that flowing blonde hair, emerald green eyes, her body tall and lush... she's sexy all the way."

Glimmer Belcourt was the female tribute for District 1 in The 74th Hunger Games. Its unknown if she was a volunteer or not, but it was like she was since she was from a career district.

Glimmer's tribute token was the only one known in the history of the Hunger Games to be confiscated. The gemstone of the ring she brought, when twisted, revealed a poisoned spike. After that, it was confiscated so she couldn't have it with her in the Games. During training, it was seen in the film that she was very bad with a bow, since she attempted to shoot a dummy, but she didn't even hit the outline of the body. It is also said in the book that she was very bad at archery. When the District 3 Male's district partner falls, she laughs, nudging the kid to laugh, probably because he wanted to have the careers as an ally, in which they would later have.

Glimmer's interview with Caesar went very well, as she did a great job and looked the part wearing a provocative see-through gold dress in the book. However, in the film, it was a short, light-pink dress. It is said that "the crowd went wild" at the sight of her. Katniss described her as "sexy and lush", and that her mentor (whoever that was) didn't have any trouble coming up with an interview angle for her. Because of this, Katniss assumed that she would get many sponsors.

During the Games, she killed the D6 Female by stabbing her repellently with some sort of knife, and took her supplies with her. She ran into the D10 Male, who took a yellow bag from her. She later runs into the Cornucopia and attacks the District 10 Male with a short sword and the District 5 Male hides, but Cato runs in and knocks both of them down. She then tries to attack the D10 Male once again but fails, as he is too quick for her. When she tries to kill the D6 Male, she fails, and is about to get killed by him, until Cato comes to her rescue, and kills him.

Later, Glimmer along with the Career alliance found Katniss and chased her up a tree. When Cato decided to go up the tree Katniss was trapped in, Glimmer offered him her bow and arrows, but he refused as he could do better with his sword. When Cato fell out of the tree due to his weight, Glimmer decided to try, but she quickly realized that the branches wouldn't support her either. When she fires at Katniss and misses, Katniss teases her by grabbing the arrow and swinging it around to embarrass her for her lack of knowledge. In the movie, Glimmer and Cato both shoot arrows at Katniss and miss, prompting Katniss to sneer, "Why don't you try throwing the sword?". Furious at her comment, Glimmer agrees with Peeta that the pack should wait for Katniss to come down on her own, as she won't be able to get away without them knowing, so they sleep under the tree, which as we all know, would head to her death.

She died after Katniss dropped a nest of tracker jackers on the Careers's camp. She died shortly after Marina, the District 4 female tribute. The other Careers (Marvel, Cato and Clove) escaped. She was 17 and placed eleventh of of twenty-four. Her mutt is clearly seen, since it had green eyes and blond hair. Katniss killed Glimmer's mutt with an arrow through it's throat when it tried to climb the Cornucopia. However, in the film, the her mutt survived, since Cato saw her mutt eating him.

During this time, Katniss and Peeta go to District 1 for their Victory Tour and see Glimmer's family. Peeta takes up painting as a hobby, and one of the paintings is of Glimmer's mutt attacking. Throughout Katniss's nightmares, it would sometimes have Glimmer's bloated body after the tracker jacker attack and her mutt form. 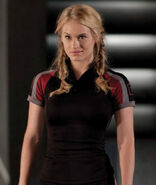 Add a photo to this gallery
Retrieved from "https://34th-hunger-games-fanon.fandom.com/wiki/Glimmer_Belcourt?oldid=6993"
Community content is available under CC-BY-SA unless otherwise noted.