Sea Green
"I think that if I can apply myself to the situation at present, I will be able to figure it out."

-Foxface talking to Caesar during her interview

Finch "Foxface" Crossley is the female tribute from District 5 that participated in The 74th Hunger Games. Katniss nicknamed her "Foxface" since she looked like a fox. Her name is heard in her interview when she is closing her talk with Caesar.

In the Tribute Parade, Foxface was seen waving nervously to the audience from her chariot, while representing her district's main export to the Capitol using her outfit, along with her district partner.

During training, she tested her knowledge of plants on a matching test, which she was seen completing very quickly. Foxface received a training score of 5. It is assumed she used this same skill to demonstrate to the Gamemakers, therefore making them less impressed than if she had shown a different skill.

As said earlier, she was seen as very smart, and even saying her name in the background. In the deleted scenes of the film, she had said, "No weapon can match the brain." Katniss described her as being sly and elusive.

During the bloodbath, Foxface is seen entering the Cornucopia and escapes alive, but empty-handed. While running away, she collided with Katniss, causing both girls to fall down. They decided to not kill each other, and both went on their separate paths.

Later on during the Games, she was spotted by Katniss at the Cornucopia near the Careers camp trying to get supplies. After sneaking around to make sure she was unidentified by any of the other tributes, Foxface made a variety of movements, which made it look like a dance sequence, according to Katniss. Katniss soon discovers that the supplies were surrounded by mines, making it very tough for any tribute not to die while going for their supplies.

When the feast was announced, Foxface decided to hide inside the Cornucopia before the feast began. She was not attacked, as the other tributes feared confronting each other if they came out from their hiding spots, and tried to keep their distance from one another. Katniss was both impressed and angry that she had not come up with a strategy that smart. Katniss pulled out one of her arrows to shoot at Foxface, but never shot and let Foxface grab her backpack and flee back into the woods, since Katniss was too caught up in her own thoughts.

On the penultimate day of the games, Foxface stole some food that Peeta collected. She ate some berries, not knowing that they were Nightlock berries, which killed her quickly. This was very ironic for her since she knew a lot about what food was poisonous and what wasn't.

Foxface was one of the tributes who had their DNA used for the wolf muttations, since she died before the finale of the Games. In this case, Foxface was a small wolfish-muttation. She had large razor-sharp claws, fire-red fur, and amber eyes, which were strikingly similar to those of Foxface. Because of her appearance of a fox, she probably resembled both at the same time. It is unknown if Foxface's mutt survived the attack at the Cornucopia. 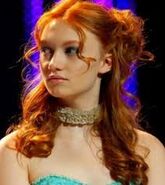