Blue
Demetria Thurman is a tribute in The 74th Hunger Games, However, she does not make it out alive. She was mentored by Marian Green.

While in the parade, she is waving with her while wearing a silver-studded outfit and a silver half-circle behind her. This could represent a grain silo, which could be the reason why she's wearing it. However, the answer is unknown.

When the Games started, she ran for supplies. However, she didn't last long at all, with her being the sixth to die, getting her 18th place. The reason for her death was that she got in a fight with Cato Hadley, eventually leading to her death. Her DNA was mixed the mutt, resembling her. However, it is unknown if this mutt survived or not. 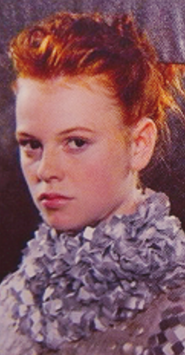