Daniel used to carry large quantities of wheat before he was in the Games. Once a boy got picked, he volunteered for his brute strength. While in training, he learned how to use a sword. Also, his odds of winning were 13-1.During the Games, he allied with the careers. Its also noted that there weren't many weapons this year in the arena. However, he eventually befriended the careers and killed them while they were distracted with a sword. This crowned him the victor that year.

He was a mentor in The 67th Hunger Games. However, his tributes died during the first day, and was seen getting in a car with the other mentors who's tributes died on the same day.

During the Games, he mentored both the District 9 Male. As we all know, he died anyways.

Daniel was later reaped for the 3rd Quarter Quell. During the parade, he was dressed as a loaf of bread. During the start of the Games, while Katniss and Finnick were trying to find Peeta, he stumbles into them in the deleted scenes in the Games. He fights Finnick but is kicked in the water. Daniel was killed by Cashmere Nicholo during the bloodbath, as she was a skilled fighter. He was not told to protect Katniss and Peeta during this time, along with the tribute from Districts 1, 2, 5, his district, and District 10 for some reason. He placed 21st out of the 24 people in the arena.

When District 13 broke in the Capitol to save the remaining victors held hostage, his name was seen on a black pillar, along with his other victors from 9. 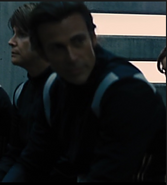