23 (when he became President)

President Coriolanus Snow was born in 3 BHG to Marcellus Ray and President Corlana Snow. Marcellus died of blood pressure complications at age of 42, when Coriolanus was eight. Basically, the kid stressed him to death. Unless mama laid down the law, young Coriolanus behaved like a hyena on a four-day meth bender. Screaming, hitting, running around, spitting on people, throwing things, cackling like a lunatic, you name it.

It didn't take long for word to get around that being the nanny in the Presidential Manor was more stressful than disarming bombs in combat. So by the time Coriolanus was about five and a half no one was around to watch him but his poor father. Marcellus tried, he really did, but he was too much of a marshmallow to command any real authority. The kid walked all over him, sometimes literally. You could say he was Coriolanus's first victim. He married Julia Pompey but their marriage was loveless.

It was suggested by many that he poisoned his wife because she tried to kill him and take their sons place. After this, he married 2 more people, one being from the Stone Family, and one being from the Willford Family. One of the kids he had from these people were Alma Coin, and Coraline Snow. Messalina, the one from the Stone Family, and Coriolanus were married when the ink wasn't even dry on the divorce papers, and their marriage lasted almost five years. That time saw Messalina give birth to a daughter Corralina (Alma Coin), and Snow beginning to lose interest in her. Unlike Julia who put her hands up and surrendered, Messalina fought Coriolanus every step of the process. Violent tantrums, throwing divorce requests in the fire, you name it.

Finally Snow decided that it was time to get rid of her for good. His mother was more than happy to assist in bringing false treason charges against Messalina. She was tried, found guilty, and executed. This happened three years after giving birth to her. She died in 30 ADD.

When Coriolanus became president, he came up with the plan of pimping the best-looking Victors for extra profits. He also increased surveillance and would have anyone who spoke a word against him in public be made an Avox. Soon no one dared. The original idea of the Hunger Games was for the plan to happen for 50 years strait, but he liked the idea so much that he set it up for 25 more years.

During his appearance in the book he shows up with his mother and his father during the feast with Rummage and the mentors. He is 8 at this time.

During this time, as expected, he became president of Panem.

During this time, he was seen reading the piece of paper telling what the twist would be for that Quarter Quell. The winner of that year was Zenobia Rivendell.

During this time, he was seen reading the piece of paper telling what the twist would be for that Quarter Quell. Two weeks after Haymitch Abernathy won the 50th Hunger Games by performing a stunt with the force field, Snow murdered Haymitch's mother, younger brother, and girlfriend as punishment because Haymitch's move made the Capitol look foolish.

It is revealed by the victor, Finnick Odair, that Snow put him in prostitution, since the Capitol loved his body. If he refused, he would be killed by poison. It is also revealed by Finnick that Snow poisoned his allies, as he believes that they would become future foes, but he had to drink the poison as well so that he wouldn't attract suspicion. Even though he took antidotes, the poison caused permanent sores inside his mouth that never healed. As a result, he always wears a genetically-engineered rose, which covers the scent of blood stained on his breath.

In the first book he just appears at the start of the Games to welcome the Tributes. He also appears in the end to crown the Victor. Since he did not like the appearance of District 1's stylist at the time, Tigris Bardon, he fired her since he didn't like her appearance.

During this year, he welcomes the tributes during the tribute parade. He appears to disapprove of the fact that the Gamemakers awarded Katniss the highest score because she shot an arrow at them, likely because he saw it as a sign of rebellion. He then tells Seneca that hope is the only thing stronger than fear, and the a little bit of hope is good as long as it is contained, and then he tells Seneca to contain his. When District 11 rebelled because of Rue's death, and he disagrees with Seneca's belief that the public losve an underdog, as he has personally visited Districts 10, 11 and 12. When the Games end, he is infuriated by Katniss and Peeta winning. For this, he executes Seneca Crane.

In Catching Fire, Snow plays a more antagonistic role. President Snow visits Katniss in her Victors' Village home and informs her of the rebellion in the other districts because of her suicide threat. He threatens to kill the people she loves unless she proves to all of Panem that what she did was driven by love, not by rebellion, in order to stop the uprising in the districts. He observes Katniss from a distance and makes sure she stays in line. During the victory tour, Peeta proposes to her publicly but Snow is still unsatisfied. During a ceremony aired all over Panem, he tells them about the Quarter Quell and how they differ from regular Hunger Games. President Snow reads the card that holds the theme of the Quarter Quell which reads "As a reminder to the rebels that even the strongest among them cannot overcome the power of the Capitol, the male and female tributes will be reaped from their existing pool of victors," He announces that this year for the third Quarter Quell, the Hunger Games will be played by previous victors. Snow greets the tributes and gives a speech as usual. President Snow confronts Cinna before interview night and tells him to dress Katniss in her wedding dress. Snow is infuriated when Cinna turns Katniss' wedding dress into a mockingjay dress and orders him killed, beause Snow already suspects Cinna is a rebel. President Snow sends in a deal of Peacekeepers to apprehend Cinna and take him to be interrogated for information about the rebellion in front of Katniss to throw her off during the games.  Cinna dies during his interrogation because he refuses to give information. Snow then watches the third Quarter Quell and is shocked when Katniss and a number of other victors escape the arena. He manages to capture three of them and demands the others be killed, and declares war on the rebel forces.

In Mockingjay, President Snow holds Peeta, Annie, Johanna and Enobaria captive and tortures them for information about the rebellion. Snow lets Enobaria off easy since she is from the most loyal district and he fully trusted her. During the interrogation, he had two avoxes, Lavinia and Darius electrocuted to death and executes Portia and the other stylists and prep teams. He did this not for answers but for Peeta to see. He also at some point ordered Johanna's head shorn. President Snow keeps Peeta healthy so he can use him to break Katniss. President Snow at some point went to District 12 and left a white rose in Katniss' room to give her a message that only she would know, which is that he would be watching her at this moment. He makes Peeta do an interview with Caesar Flickerman so he can manipulate and break Katniss. President Snow appears on screen during Peeta's third interview and introduces him and Caesar. After Peeta implies there will be an attack from the Capitol on District 13, President Snow orders the interview stopped and for him to be taken away. After Peeta is taken away, President Snow orders for him to be hijacked in order to use him against Katniss. During an interview Katniss and Finnick shot to distract the Capitol from the rescue team, Finnick reveals President Snow kills his enemies and allies who can become threats to him. He also reveals that Snow forced Finnick into prostitution, selling his body to wealthy Capitol women for high prices. President Snow is enraged by this and becomes angry at them, but plans to kill Katniss by using the brainwashed Peeta. Boggs reveals that retrieving Peeta was far too easy and suspects that President Snow let them take Peeta so he could kill Katniss.

President Snow goes on television to talk about the death of Squad 451. His broadcast is cut short after Beetee hacks into the system and airs a propoganda. President Snow's forces discovers the remains of Boggs in an apartment of a Capitol citizen and realizes he has been fooled. President Snow figures out Katniss is still alive and sends a pod of lizard-human mutts to hunt her down and kill her and her squad.

During the final battle of the war, President Snow was in his mansion and was taking in Capitol children whom he was planning on using as human shields. Later on, President Snow was going to call an official surrender but before he could there was an explosion outside his mansion that killed the Capitol children and rebel Casualty Aides, including Prim. Snow was arrested and found guilty. Katniss finds him in his rose garden and he tells her the bomb that killed Prim and the others was not from him but from President Coin. Katniss refuses to believe him but he reminds her of the promise they made not to lie to each other. Katniss ends up believing him and ultimately kills Coin. After the overthrow of the Capitol in Mockingjay, Snow is tried for, convicted and sentenced to death. As the Mockingjay, Katniss is given the opportunity to execute Snow. Snow laughs and grins at the irony and the thought of Prim's death: he and Katniss were being used as pawns. When Katniss is supposed to shoot him through the heart with an arrow, she instead assassinates President Coin because she thinks Coin is just as bad as President Snow; she was the one who came up with the idea for another Hunger Games where the Capitol's children would have to compete and was part of the cause of Prim's death. In the chaos that follows, Katniss witnesses Snow roaring with laughter and coughing up blood as people surround them. When everything calms down, Snow is found dead, speculated to be from choking on his own blood, or being crushed by the crowd. 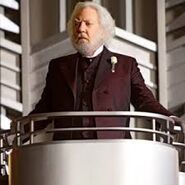 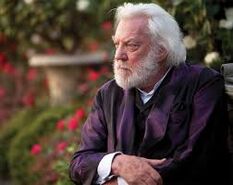 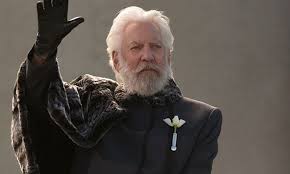