"Yeah, well, we killed her. And now we're gonna kill you."

Clove Kentwell is the most dangerous female tribute when it comes to combat in the Games. She was reaped for The 74th Hunger Games. She is seen as an athletic tribute, who will stop at nothing to stop her target. She is from District 2, and her partner was Cato Hadley.

During the reaping, she volunteered for a female tribute that was going to be in the Games. She had to do this by fighting her, and she would later get restrained by Peacekeepers. Her district partner, Cato, also volunteered to be the tribute that year.

During the parade, she wore an Ancient Rome inspired outfit. It can be assumed that she was one of the tributes that gave Katniss a dirty look at this time, since she stole the spotlight from the other tributes, along with Peeta Mellark.

During training, she showed off her knife-throwing skills on some dummies. During her private session, she got a 10. She would later develop a hatred for Katniss, as a lower district received a higher score than her. The other careers had the same feelings for her.

During her interview, she talks to Caesar Flickerman about her knife-throwing skills. She acted very viciously and brutally, which is good since that would be able to get her sponsors.

During the bloodbath, she threw a knife at the boy from District 9, killing him, getting blood all over Katniss. She also tried to throw a knife at Katniss, but her victim used a backpack as a shield for the knife coming at her, which worked. Clove would not pursue her, and she would later go back to the cornucopia, possibly for supplies. Later, she kills the District 10 Female. It is also seen that she got into a fight with the District 7 Female. During the night, the careers are hanging out with a campfire next to them. She is seen throwing knives at an iguana for fun, since she looks bored, while the other careers are having a good time. When they met up with Katniss in a tree, the careers decide to make a cap where her tree was, so Katniss can't escape without the careers knowing. During this time, Katniss cuts down a tracker jacker nest, giving Clove a couple of stings, while the other tracker jackers had killed Glimmer Belcourt and the District 4 Female.

Later, when Clove and the remaining careers were lured in by Rue Stenberg's trap, the careers supplies were blown up by Katniss. This enraged Clove, while Cato would go in a frenzy and kill the boy from 3 by snapping his neck. Clove and Marvel Sanford calmed Cato down long enough to explain to him that the tribute that destroyed their supplies must have died. However, they soon found out that the person responsible for this was still alive, so they waited for nightfall to hunt down the tribute.

During the feast, when Katniss was about to go for her supplies, she was attacked by Clove. However, Thresh Morrowson attacked her, interrogating her, trying to find who murdered Rue. Since Clove taunted Katniss on how they killed Rue, Thresh slammed her head in the cornucopia until she was severely injured. By the time she is dying from the wounds of Thresh, Cato is too far away to save her. As Katniss flees the feast, she sees Cato kneel beside his ally and beg her to stay with him. As this happens, it's clear that she was very close to him, possibly meaning that she was friends with him before the Games. It's revealed here that she's not really a beast, but a scared child worried for her district partner. Clove dies in Cato's arms.

After her death, her DNA was mixed with a wolf to form a mutt that resembled her appearance. It's unknown if her mutt survived or not.

During Katniss and Peeta's victory tour, they go to District 2, in which they see both of the tribute's grieving families. She tries to avoid eye contact with Clove's parents, and they are revealed to be in their 30's. Later, Katniss would have a nightmare on Clove stabbing Katniss in the cheek. She would turn into a mutt, licking Katniss's wound, causing more pain. Clove then reminded Katniss that she can't run away from her fears and the Hunger Games, and then chases her. 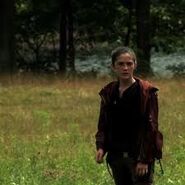