Toby Jones
Caludius is described by Katniss to have a loud voice, and a sense of superiority. Claudius usually announces invitations to feasts, and always ends his sentences with the slogan for the Games. He is the one of the cousins of Iuvartus Templesmith, the Head Gamemaker during The 67th Hunger Games.

During college, he met and became friends with Caesar Flickerman.

During these times, he roots for Maria Mellark. However, she dies on day two anyways in the hands of Augustus Braun. As said earlier, his father was the Head Gamemaker that year.

This year, he was heard announcing the 73d Games, right before they began, ending his statement with his catch phrase "And may the odds be ever in your favor!"

During the 74th Hunger Games, Claudius spoke in a panicked voice, as Katniss and Peeta threatened the Gamemakers that they were going to commit suicide if they both couldn't win. He is also seen during the tribute parade. He then let the two lovers win

During these times, he announced the start of The 75th Hunger Games. He was also very fond of Katniss and Peeta's costumes, as usual. Its also hinted here that those two aren't his favorite tributes that year, which is reasonable, since they are stronger tributes there. Its probably a Career victor, though, it isn't mentioned which one he likes.

Claudius is heard in the Mockingjay propaganda. 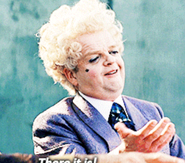 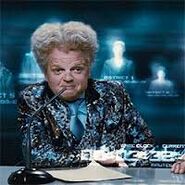