Chris Mark was the male tribute from District 5 who participated in the 74th Hunger Games. His mentor was James Logan.

During the Tribute Parade, he and Foxface were waving at the audience from his chariot, while representing his district's main export to the Capitol using his outfit, along with his district partner, Foxface.

Chris was seen in several scenes in the training. He was seen when Atala was giving out the rules and was seen at several stations. When Peeta Mellark threw the medicine ball at the rack of weapons, he was seen staring at the careers at the time.

Chris was killed in the initial bloodbath. Like the majority of the tributes, he ran for supplies. After arriving at the Cornucopia, he spotted the District 3 Female on the ground with a black backpack. He grabs a sickle, kills her with it, and takes her supplies.

He is about to kill the District 7 Female but when she confronts Jason, he is knocked down by her district partner with a spear, about to kill him. Fortunately, Thresh Morrowson passes by; distracting the District 7 male. He crawls away, but is attacked by the District 6 Male, who strangles him onto a crate. He gains advantage and hurls the District 6 male's head into the crates multiple times and stabs him in the back of the neck. He is later seen coughing up blood, though it was a very brief moment seen in the movie since he was slashed with a bar mace by Cato Hadley. He is also killed along with the District 4 Male. After his death, his DNA is mixed in his wolf mutt. It's unknown if his mutt survived or not. 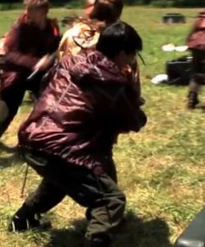 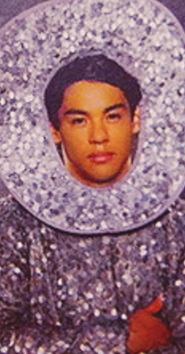 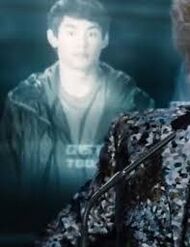