Gray
"During the day, they've been leaving another tribute, the boy from District 3, to watch over supplies.

'Yes, he stays at the camp full time'

'I guess they agreed to let him live if he acted as their guard. But he's not very big.'"

-The District 3 Male being talked about in The Hunger Games.

Chase Nelson was the male tribute from District 3 that was in the 74th Hunger Games. It is known that he was mentored by Yohan Fairbain, and we know that he was said to be a scrawny kid that was taller than Katniss Everdeen and Rue Stenberg, according to The Hunger Games.

During the parade, he wore a silver costume and a silver headdress to represent the workings of electronic devices that his district made.

During training, he was seen making a fire with one of the tribute guide members. He also showed concern when his district partner was injured in training, but laughed it off when Glimmer Belcourt elbowed him, probably to make the Careers like him.

In the interview, Katniss Everdeen said that there was nothing interesting about his interview. He wore a yellow suit to his interview with Caesar Flickerman.

Chase survived the initial Cornucopia Bloodbath. After arriving at the cornucopia, he grasps on Marvel Sanford’s ax. When he refused to let go, Marvel shoves his heavy backpack into his face, which made him fall to the ground. He is then later seen fighting the District 7 Female over a backpack. He somehow managed to survive and escape into the forest while his district partner not so lucky, and died on the first day.

Later in the Games, the careers wanted him as an ally, since he could reactivate the mines to gear their supplies. So, in order to save his life, he did what he was told. While he was distracted by Finch Crosselly's footsteps, Katniss blew up the supplies. However, when Cato Hadley thought his mines failed, his neck was snapped, killing him instantly. He was seen guarding with a spear and placed 9th.

After his death he and the twenty other fallen tributes, probably had his DNA mixed with that of a wolf, to form a muttation which had similar characteristics as the deceased tributes. It is unknown if his mutt survived the final battle between Katniss Everdeen, Peeta Mellark, and Cato Hadley.

During this time, his picture and his family are seen in the background during Peeta and Katniss's Victory Tour. The only family member standing there was possibly his mother, meaning the tribute doesn't have a father or siblings. 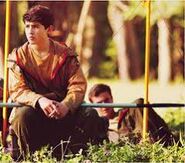