E. Roger Mitchell
"I know Chaff by sight cause I've spent years watching him pass a bottle back and forth with Haymitch on television."

Chaff being mentioned in Catching Fire

Chaff Mitchel was the victor of The 45th Hunger Games at the age of 16. He was the 2nd to last victor of his District. He and Haymitch were friends when he was alive, as he was a heavy drinker, just like Haymitch. He also plays as a tribute when he is reaped for The 75th Hunger Games. Effie mentions how he could never stay out of a fight.

These Games took place in the mountains/plains. Also, his odds of winning were 9-1. They were very aggressive, as Chaff lost his left hand, but refused a fake hand.

During his reaping, Effie mentions how he could never stay out of a fight. After the tribute parade, Haymitch introduces him and Seeder to Katniss and Peeta. Chaff kisses Katniss on the mouth against her will. Haymitch and Chaff laugh about it after that. Obviously, Katniss didn't find it very funny. We later know that him and Haymitch are friends. Katniss finds him throwing spears with Peeta and Brutus Gunn during training. While being interviewed by Caesar Flickerman, Chaff steps on Seeder's foot and talks about how Snow could change the Quell if he wanted to, but he must not think that it matters much though. During the countdown, he is spotted by Katniss standing next to Tiffany. On the 3rd day, however, he gets killed by Brutus, and places 8th out of the 24 tributes. Katniss and sees his death portrait project in the sky. He was one of the ones told to protect Katniss and Peeta.

When District 13 broke in the Capitol to save the remaining victors held hostage, his name was seen on a black pillar, along with his other victors from 11. 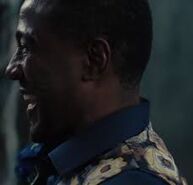 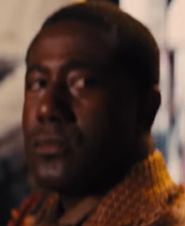