Alexander Ludwig
"Go on. Shoot! Then we both go down and you win. (Sobbing) Go on. I'm dead anyway. I always was, right. I didn't know that 'till now. Isn't that what they want, huh? No! I can still do this. One more kill. It's the only thing I know how to do, to bring pride to my district, not that it matters."

-Cato saying some of his last words to Katniss.

Cato Hadley is the main career participating in The 74th Hunger Games. He is described as a menacing tribute that could throw a spear as far as Katniss could shoot arrows. It is assumed that he was the leader of the alliance, since he was in the spotlight. He is from District 2.

During the reaping, a boy that wasn't Cato was picked. However, Cato volunteered to be the tribute that year, since he trained since youth in a special academy that was meant to prepare their children for the Games. Its in this instance that Katniss describes his appearance.

During the parade, he is seen in a roman inspired outfit, along with Clove, his district partner. It can be assumed that he was one of the tributes that gave Katniss a dirty look at this time, since she stole the spotlight from the other tributes, along with Peeta.

During the interview, he shows off his great strength by shaking Caesar's hand really hard. It is also seen in the deleted scenes that Cato liked the Games so much that anyone who didn't agree, they were, "idiots" to him.

During training, he mainly trains in combat, since its his specialty. Sometime during training, his knife is taken. He assumes that its the boy from 6, since he was near the place were it went missing. The two get into a fight, and Cato promises to go for him during the Games. After this, he laughs with his fellow careers at Peeta for falling down at the climbing station. Because of this, Peeta shows his strength by throwing a weight at a weapon stand. During his private session, he received a 10.

During the Games, he has a multitude of tributes killed. First off, Cato runs toward the Cornucopia and goes for supplies. He first targets the District 6 male, as he had promised to do during training, and beats him up. The District 10 male tries to pass him, but Cato starts to fight him and eventually kills him, slamming a machete into his chest, with Jeremy serving as an extra death at the time. In the film, The District 4 Female sees this and runs to Cato, but Cato dodges her attack, knocking the sword out of her and slamming his sword or a machete in her chest, and pushes her over a crate, knocking her down but she manages to escape alive with a backpack and heads towards the forest. The District 6 Male fights with Cato, after Glimmer shouted for help. Cato took a hand scythe and slaughtered the District 6 Male with it. Later, the District 4 male tries to escape the Cornucopia only to be slashed in the throat by Cato, presumably bleeding out from his wounds or suffocating to death. At the same time, he killed the District 5 Male in the same way. Not long after this, Cato finds the District 4 female in the forest and kills her alongside his fellow Careers in the film. After the Games, he meets up with the careers except for the boy from 4, as he was killed in the bloodbath by another tribute in the book. However, the girl from 4 is still alive in the book, and never fought him. He then lets Peeta be in his alliance, as he is good with a knife, and keeps him since he can get info from him on where Katniss is. During the first night, he finds the District 8 Female and kills her in the film. However, in the book, he lets Peeta kill her, and also calls him,"Lover Boy."

Days later, he runs into Katniss since she ran away from a forest fire. He also kills the D10 Male in the morning of this time in the book. She climbs up a tree, and nudges him to go up. During this time, he tries to climb up there, but falls because of his weight, cursing as we gets up from the ground. Katniss thought that the injury would have broken a bone, but he gets up with pretty much no problems. Because of this, the careers, including Peeta, decide to camp where Katniss is, so she can't escape without the alliance knowing of it. However, Rue gives Katniss advice during the nighttime while the careers are sleeping, to cut down a tracker jacker next close to Katniss. She does this, and it comes crashing down, giving Cato a bunch of stings from it. However, the girl form 4 and Glimmer because of it. Katniss manages to get the bow and arrows from the dead Glimmer's hands, but Peeta returns and urges her to run, since he wants to save her. As he does so, Cato cuts his way through the brush and realizes sees Peeta has done. Angered at Peeta's betrayal, Cato engages the other tribute in a fight, in which Cato wins, with Peeta escaping only with a severe leg wound. After the fight, Cato leaves him to die.

After this, Cato and the alliance sets up a camp near the cornucopia to guard the supplies they have there. They also let the District 3 Male stay in their alliance if he can activate the mines, and set them up around the supplies so it can be guarded better. However, Cato's alliance gets tricked by Katniss and Rue's plan, luring him and the other careers in the forest, leaving the boy from 3 guard the supplies with a spear. However, when the food eventually blow up, Cato gets so enraged that he snaps the boy's neck in a spit second, killing him. Clove and Marvel calmed Cato down long enough to explain to him that the tribute that destroyed their supplies must have died. However, they soon found out that the person responsible for this was still alive, so they waited for nightfall to hunt down the tribute. During the feast, Cato and Clove go back to the Cornucopia and lie in wait for their backpack, which contains an item that they need. It is unknown why only Clove went in for the backpack, but by the time she is dying from the wounds of Thresh, Cato is too far away to save her. As Katniss flees the feast, she sees Cato kneel beside his ally and beg her to stay with him. As this happens, its clear that he was very close her her, possibly meaning that he was friends with her before the Games. Its revealed here that he's not really a beast, but a scared child worried for his district partner. Clove dies in Cato's arms.

By this time, Thresh has stolen both his own backpack and Cato's, which is most likely what motivates him to kill Thresh instead of Katniss. When Cato kills him, its assumed that Thresh didn't go down without a fight. Katniss speculates that the District 2 backpack contained body armor to fend against her arrows, or he got a sponsor. During the last day of the Games, (during nighttime) Katniss and Peeta think he is on his way to kill them, so Katniss shoots an arrow at his chest, but it bounces off, since he is wearing some sort of body armor that was thought to be in District 2's backpack, or the District 11 backpack. Ignoring Katniss's arrow, Cato flies past Katniss and Peeta and makes his way to the Cornucopia, and climbs on top of it. The two race after him after sight of the mutts chasing him. Since Cato had many bloody marks on his face, its assumed that he got these from either Thresh, or the mutts. Its assumed that its the mutts, since they were claw marks. Cato fights Katniss and Peeta on top of the cornucopia. He almost manages to drop Katniss off of the platform, but Peeta goes behind him to throw Cato in another direction. After minuets of fighting, Cato goes being Peeta, maligning that if Katniss shoots him, they'll both go down. However, Katniss shoots Cato in the hand, causing the two not to fall off. Peeta then punches him him in the stomach and pushes the boy off of the cornucopia. At first, Cato manages to fight the mutts off, as the sound of his sword against the Cornucopia can be heard for quite some time. Eventually, despite his great strength and skill, he is disabled from exhaust, and the mutts brutally attack him for what seems like hours. However, the body armor makes his death much slower, making the attacks from the mutts last longer. After a long time of him being attacked by the mutts, he mouths the word "please," and out of pity, she shoots the arrow into his skull, killing him instantly.

Due to PTSD, Katniss begins to have nightmares about the arena, one of which involves Cato getting killed by the mutts. During Katniss's Victory Tour, she sees Cato's grieving family

During this time, she thinks of Cato several times. One of them is how Cato killed Thresh. 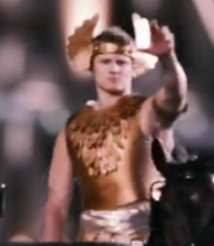 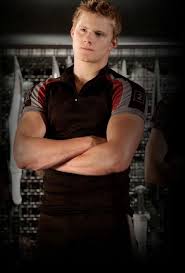