Bruno Gunn
"Brutus, a volunteer from District 2, who must be at least forty and apparently can't wait to get back in the arena. "

Brutus Gunn is the victor of The 46th Hunger Games at the age of 16. He is from District 2, and volunteered to be in The 75th Hunger Games, since he couldn't wait to to be back in the arena again. He was a career in both Games. However, he died in the 75th Games, and was the last one to die.

During this year, he and the other tributes were forced to eat dead elephants and other savanna animals. Since he was so skilled with a spear in the 75th Games, it can be assumed that he was also very good at using it this year as well.

During this year, he was mentored by Magnus Sterlingshre. Also, his odds of winning was 5-1. Before the 75th Games, Katniss finds Peeta watching his Games. After he won, he became freinds with one of his fellow victors, Struve, since he took interest in his spear fighting skills. This also proves on how he probably used a spear this year.

During this year, it is previously said that he couldn't wait to to be back in the arena again. Peeta also makes friends with him. During training, he is seen using a spear. It is mentioned that his training score was very high. Brutus stood next to James Logan and Katniss Everdeen on his pedestal. When running to the cornucopia, Katniss tries to shoot an arrow at him, but uses his flotation device as a shield, and gets liquid all over his face. He dives back in the water, only to attack more tributes when entering the bloodbath. During this time, he killed Marian and Cecelia. He allies with the careers, as expected.

On day 2, him and the other careers attack Katniss's alliance. He fights with Finnick, and doesn't get injured, but is caught off guard when the cornucopia spins. He is seen later chasing Johanna and Katniss on the last day of the Games, until she stumbles upon Katnisss, who is injured. He thinks that she's as god as dead, so he ignores her and tries to catch Johanna. After this, he runs into Chaff, in which he kills. Because of this, Peeta killed Brutus himself out of anger.

When District 13 broke in the Capitol to save the remaining victors held hostage, his name was seen on a black pillar, along with his other victors from 2. 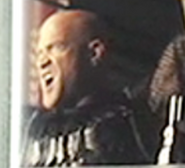 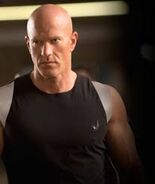