Stef Dawson
"So that's who Finnick loves, I think. Not his string of fancy lovers from the Capitol. But a poor, mad girl back home."

Annie Cresta is one of the victors of District 4. She won The 70th Hunger Games at age 18. She also got married by her mentor, Finnick Odair. She suffered from PTSD after her Games, after seeing her district partner being beheaded by a Career during the Games she was in.

Halfway during the Games, she joined the Careers to increase her survival. However, she left the alliance with her district partner. However, he was beheaded by the boy from 1, making him 7th. This disturbed her for the rest of her life, meaning that she had a connection to him, or was just horribly disturbed by the beheading itself. That leaves the tributes from 1,2, herself, and the District 9 female. After this, there was an earthquake that shook the arena, making the arena flood. Since Annie was from District 4 and could swim well, the other tributes drowned, leaving her the victor.

As said previously, she was mentored by Finnick.

During these times, she was reaped for the female tribute for this year, she went hysterical. Thankfully, Mags took her place by volunteering for her. She didn't do this so she could win, but she did it to save her.

After being captured by the Capitol, she was rescued by District 13. During this time, when District 13 was breaking in to save the remaining her in the Capitol, her name was seen on a black pillar with the names of his other fellow victors from the same district. The other districts had the same thing, with their names plastered on the pillars as well. After this happened, she married Finnick and became pregnant. When the remaining victors had to vote if there should be a Hunger Games on the Capitol children, Annie voted no, with Beetee and Peeta. However, her husband was killed during the 76th Games. Later, she would give birth to her only child, Lucas Odiar. 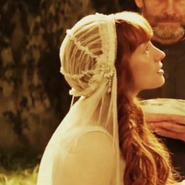