Alma Coin (Corralina Snow) was the president of District 13 untill 76 ADD, in which a period of one day, she ruled Panem and the Capitol, succeding President Snow. She was born during The 27th Hunger Games. Her mother was Messalina Snow, while her father was Coriolanus Snow. its also known that she was born in 27 ADD

Three years after she was born, her mother was executed when she tried to put up a fight with her husband. She was shipped off to a district group home, from where she reportedly disappeared at age 17. No one ever heard from her again.

For almost a year and a half she lived like a wild person, scratching a living off Panem's wilderness. She finally made it to what was once District 13, which was still a toxic place at the time. To her shock she found people living there who, after some reluctance and filibustering, took her in. The rationing skills she had honed in her time in the wilderness proved life-saving for the surviving people, who had nearly exhausted their emergency supplies since the bombing.

Over the years she went from being an outsider to an invaluable leader. Of course she was too smart to tell them her real name since the name of "Snow" was mud in D13. She gave herself a new name: Alma Coin.

In the Second Rebellion she played an important part. As part of her plan to rule Panem and to get more people on her side, she sent Capitol airplanes with bombs to kill children, to make it look like Coriolanus did it. She then formed a plan to announce a last Hunger Games (The 76th Hunger Games) with the remaining Capitol children. The 7 remaining Victors were to vote yes or no. Most of these victors said yes. Katniss however found out Alma Coin was responsible for the attack on Capitol Children later when she talked to Coriolanus. A few medics were also there, including Katniss' sister Primrose Everdeen. Instead of killing President Snow, Katniss kills Alma Coin, ending her reign and cancelling the 76th Hunger Games. After this, Coriolanus Snow either choked on his own blood from laughing or was killed by the crowd.

Apologies for any incorrect information. 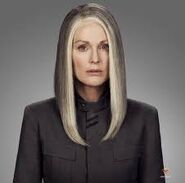